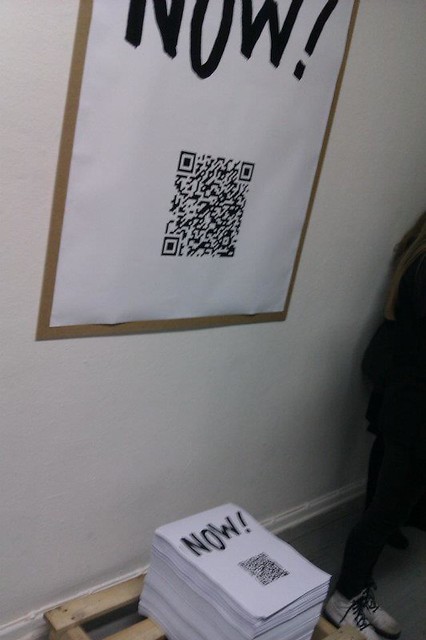 Installation Images from Now! exhibition at the Kunstraum Brethanien

A Demolition/Demonstration from the City of Today for Feminine Urbanism “Model Citizen” series, Toxic Shock Syndrome (After Now!) is a historic reenactment of the 1963 Civil Rights protest in Birmingham, Alabama.

In the original footage preserved by the Kino Arsenale in a perpetual state of decay, A comely housewife protester is dragged through the streets of Alabama. Drawn and quartered by white police officers wrenching her limbs. Their position of power is replaced in this installation, by a dilapidated building’s air circulation shaft. The song’s rejoicing tempo and politically charged lyrics are replaced by the ventilator’s failing and forgotten infrastructure. Santiago Alvarez’s Protest footage was hand cut to create one of the first music videos ever created.  Hollywood’s “first black starlet” Lena Horne wrote and performed “Now!” in reaction to the civil rights protests- to the tune of Jewish folk song “Hava Nagila”.

In scenes with other white actors, Lena Horne was often shot in green screen, lit with bright lights in order to whiten her skin, and returned as a lighter “whitewashed” version of herself to appease racist audiences. Lena Horne is a model citizen for the City of Today for Feminine Urbanism by surviving the brutal removal and erasure from her creative discipline: in this case Hollywood films. The video loop exaggerates the film studio’s whitewashing of her racial background to create pop-cultural appeal. The footage (like our memories) erodes in the feedback loop of the “poor image” reenactment; alongside the disintegrating architecture. The green nature motif of the dress, like Horne, is removed/demolished by the green screen digital erasure process.

City of Today for Feminine Urbanism is a masterplan for survival in the form of construction documents as a marginal historic fiction, where intimate solutions are proposed for urban scale problems. Model Citizens/Identity Prototypes is a series of digital media identity demolitions as demonstrations of spatial understanding of nation branding.

Toxic Shock Syndrome installation was exhibited at the Kunstlerhaus Brethanien Berlin in a show curated by Hito Steyerl for the Kino Arsenale in 2012, and in 2013 at Hundred Forsyth Gallery NY, and Radiator Gallery NY.